Here are some facts about the Bungle Bungle Range and Purnululu National Park that you may not know. On a Bungle Bungle Guided Tour you are given a great insight to the national park and the history of the area.

The following facts are bound to spark your interest to head to the Bungles and see it all for yourself.

The Bungle Bungles were not known to the public until the early 1980’s when a film crew from Perth were in the area and were told by local stockmen that there is an area that they should check out. Since then, it has become increasingly popular with tourists and tour operators.

The Bungle Bungle Ranges are located only 53km off of the Great Northern Highway, though due to the rough road conditions it generally takes about 2 hours to travel into the National Park.

The name Bungle Bungle is what the area is commonly called, though it is located inside of the Purnululu National Park. The word Purnululu refers to the range, meaning sandstone in the local language of the Kija people. The name Bungle Bungle or Bungles is now what the range is now known as, though the origins of the name are not well known, some say it is a reference to a Kimberley grass called Bundle Bundle grass. 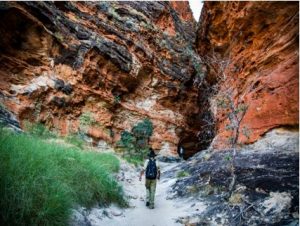 The Bungle Bungle Range was formed over 350 million years ago, the gradual weathering and erosion of the range has resulted in the dome formations.

The domes are famous not just because of their shape but also the prominent black and orange bands that wrap around them. The darker bands are from an algae growth on the outside layer, while the lighter orange band is an oxidised iron compound.

The area is a significant part of the indigenous culture, with some parts of the National Park strictly prohibited to anyone. There a quite a few rock art and cave paintings through the national park, these can be seen on your Bungle Bungle Guided Tour.

The area became a National Park in 1987 and officially become World Heritage Listed in July of 2003. The average height of the Bungle Bungle range is approximately 200-300 metres high and seems even higher whilst walking through the gorges and chasms.

You can experience the National Park from above with either a scenic plane flight from Kununurra or a scenic helicopter flight from the Bungles base or the Warmun base with HeliSpirit.

8 Must-do Adventures in the Bungle Bungles

Where to visit on your Kimberley 4wd tours

Accommodation During Your Kimberley Expeditions