Bungle Bungle Flights – A Day in the Life of a Pilot

Bungle Bungle Flights – A Day in the Life of a Pilot

I wake to the now familiar sound of an alarm coming from the next-door tent. I stick an arm out from under the doona to see just how cold it is in my tent this morning. Not too badbut a bit chilly so I spring out of bed and put some warm clothes on.

The coldest night we’ve had this season dropped down to five degrees – which might not seem that cold to people from southern climates but when you’ve lived in the Kimberley and haven’t had a winter for nearly 10 years it’s freezing! Luckily though it’s only a matter of minutes before the sun starts delivering some warm rays.

We worked out pretty early on who in the camp is a night owl and who is a morning person – there’s some of each in this season’s crew. So as usual the morning people are cheerily up and about early whilst the night owls take a bit longer to get moving! 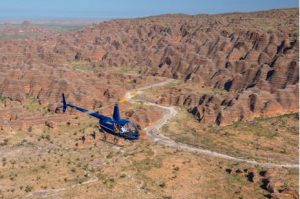 A quick breakfast and then it’s up to the office to prepare for the day. It’s the shortest commute I’ve ever had in my life – a whole 200 metres! Today we’ve got a tour group in early and are at the office at 6am, so we start the gennieas the solar hasn’t kicked in it, fire up the hot water urn and set about ‘dailying’ the helicopters (that’s the daily inspection before flight), and then starting them to make sure everything is running as it should.

The tour bus rolls up and the first of our passengers for the day arrive for their Bungle Bungle scenic flights. We run through the now very familiar safety brief, and check and weigh in the group, which always prompts a few jokes about how much people have eaten on their holiday or how heavy their boots are!

We load the first of the groups on their bungle bungle flights and off we go – the best part about the job is seeing people’s reactions when they first take off on their Bungle Bungle helicopter tours, and again when they realise just how big the range is – you only see a tiny fraction of it from the ground, so getting that perspective from the air is often jaw-dropping.

18, 30 or 42 minutes later and we’re landing back at the helipad having given the passengers a scenic flight they’ll never forget. So it’s time for them to continue their day, and we refuel, load the next passengers and off we go again.

At this peak time of year, the day is almost fully booked with three helicopters flying back to back, and before we know it, we’ve flown the last of today’s 80 odd passengers on their Bungle Bungle scenic flights, and are cleaning and checking the machines over to make sure we’re all ready to go again the following morning.

After these long flying days we need a little while to wind down so back at camp, we light the fire and digest the day as the sun sets around 5pm. Dinner here is a family affair, with each of us taking it in turns to cook, luckily we’re all pretty adept in the kitchen so you know it’s going to be tasty!After the post-dinner clean up, we retreat back to the fire under the beautiful Kimberley night sky – the stars and Milky Way here are just incredible. It’s not long before the first of us decides it’s time to call it a day and heads to bed in preparation for another big day of Bungle Bungle flights.

Pilot Q & A On Kimberley Tours From Kununurra

Where to visit on your Kimberley 4wd tours