The Best Time Of Year To Visit The Bungle Bungle

The Best Time Of Year To Visit The Bungle Bungle

Whilst visiting the Bungle Bungleis an amazing experience, it’s undeniable that visiting the Bungle Bungle during aperiod of pleasant weather will largely improve your visit. Although there are weeks of beautiful sunny days, there are also plenty of stormy, humid and scorching days throughout the year. With so many sites to see in the great outdoors, it’s important to visit PurnululuNational Park at the right time.Purnululu National Park closesfrom October through to March, as there is limited accessibility due to rainfall, which also affects the ability for tour operators to run. Tour operators will operate during the Dry Season, with a handful also operating during October.Taking into consideration the average daily temperatureand the rainfall, it’s widely accepted that the most temperate time to visit is from the beginning of May through to the end of August, with March and September being warmer, yet still enjoyable. 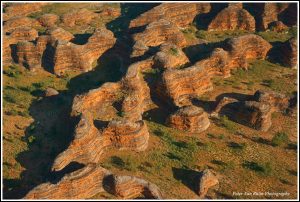 Rainfall in the North is coupled with high temperatures, resulting in high humidity. The heaviest rainfall takes place from November through to March, with February often bringing around 80mm of rain. This can largely impact access toPurnululu National Park, with roads being closed due to flooding – withthe only access to the Park beingvia plane/helicopter. As well as accessibility being affected, certain trails and tracks within the Park become flooded, with waterfalls and creeks beginning to flow. In the drier months, visitors can take an easy walk along Piccaninny Creek, with easy access by 4Wd vehicle to the starting points of walks.  There is the opportunity to fly into Purnululu with HeliSpirit, landing near the Bungle Bungle Range and be guided into the gorges with a Bungle Bungle Guided Tours guidein the wetter months. This is really spectacular but you need to be flexible as delays can result due to high rainfall and monsoonal storms.

With so many sights to see, and the opportunity to walk some stunning bush tracks, we recommend visiting around mid-year. Bungle Bungle Guided Tours operates from April through to September, with a small number of experiences offered in October.

The Best Type of Kimberley Tours

Seven Things to Take on Your Bungle Bungle Tour

One Of The Best Kimberley Australia Tours